It's cold out there, so time for a BOOK Giveaway! 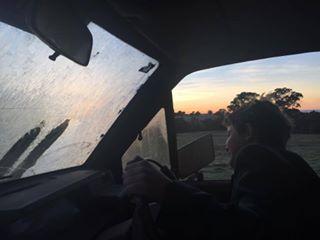 Oh my Gosh. I think winter has finally hit our hills with a vengeance. The thickness of the frost on the ground yesterday morning had us thinking it had snowed! I could only cringe on behalf of my poor Jacaranda Tree snug under it’s super-bag (top) and layers of mulch (bottom) and send a prayer up to the heavens it wasn’t going to take affront at the cold and curl up and die. Due to us living beside a huge lake, we don’t generally get severe frosts here, but as the lake is currently very low, it was Jack Frost’s turn to get even. Brrrrr … was the only thing to say, and pulling on the down jacket, followed by earmuffs, was the only thing to do.

The Farm Boy drove the ute to the bus-stop with his head hanging out the side-window to see the track, (the front windscreen simply refroze), and the school bags had to be wrestled from the ice trying to glue them to the old tray-back. Even Ange wasn’t happy to be dragged from her nice warm kennel to brave my early morning trudge up and down the hills to check the stock and troughs.

Saturday was also icy with, I swear, tiny flakes of snow in the rain. The wind knifed straight through you and of course, the Princess needed to ride her pony. Lightning wasn’t overly happy to have his cosy rug taken off and be made do something, so he was a cranky-pants. Subsequently mum ended up riding the pony to get his ‘cantankerous beans’ out of the way, so the Princess could have a nice ride. I had five layers on, resembled a Michelin woman, and could barely move, so H had to heave me onto the horse, even though the steed is only 13 hands high. It was quite the sight. At least if I had’ve come off, I would’ve simply rolled to the bottom of the hill. There was that.

The rest of that freezing cold day was taken up with important stuff, like reading and baking, much more civilised things to do when the weather is so disgusting. I was able to dispense with at least three layers and curl up in front of the fire with some chocolate, cups of tea and a good book. Bliss, I tell you.

Which leads me to three very interesting books, I’d like to mention to you today.

One is from our friends at Allen and Unwin, and is written by my mate, Freda Marnie Nichols. It’s the remarkable story of Australia’s greatest imposter and is called THE AMAZING MRS LIVESEY.

Now, if you’re a Richard Fidler fan like me, you may have caught up with Freda’s interview a number of weeks ago detailing how she came to write this story and titbits from the book itself. If you didn’t catch it here’s a link to the podcast.

It turns out that the notorious Ethel Livesey was a serial fraudster and confidence trickster. She had over 40 aliases, eight official marriages, four children and five divorces in a time when divorce was completely scandalous. Her remarkable life stretched across the world with claims she was a cotton heiress, wartime nurse, opera singer, artist and close friend of the King, just to name a few.

Freda, in association with Luita Frances Aichiner, Ethel Livesey’s granddaughter, has written an impressive tale, which had my eyes riveted to the page, right to the very end. I can’t believe this woman got away with all that she did! Thank goodness, for her sake, the internet wasn’t around. She wouldn’t have lasted a day, which, would have been a very good thing for those she duped! Her cheek was gobsmacking.

I asked Freda how she came to write this incredible story.

“While catching up with a girlfriend for lunch, she started telling me about finding out some fascinating things about her paternal grandmother, and that she appeared to be an international con woman. She was having difficulty finding her father’s birth certificate and I offered to help. From there we found out so many incredible facts and stories. I decided to talk with my publisher about it, and THE AMAZING MRS LIVESEY was born.”

And what a story it is!

With thanks to the lovely folks at Allen and Unwin, I have one copy of THE AMAZING MRS LIVESEY to give away! All newsletter subscribers will be entered into the draw. Result, next week so stay tuned …

Over at Central Station - where men and women of the Australian Outback come together to share an insight into their lives - the good, the bad and the dusty; they have released a book. And I'm in it! Just a little bit excited about that ... My story, 'Our Extreme Sea Change' is the first in this colation of true stories from Australian cattle stations edited by Jane Sale and Stephanie Coombes and brought to you by ABC Books. It's the type of book you can pick up and put down at the conclusion of each story, but you long to return to it. For those who have worked on stations, the book will bring back a ton of memories and for those who wonder what it would be like, it will inspire you to get out there and give it a go.

You can buy the book at any good bookstore and also online. Here's what it looks like.

And you can find out more at the Central Station Blog, and perhaps even win yourself $250! http://www.centralstation.net.au/win-250-with-our-new-book/

The other book that hit my roadside mailbox is completely different.

BOOTS OFF, APRON ON, is a cookbook from the kitchens of stations in outback NSW. And don’t you just love the name?! It is so descriptive and true. It happens every day at my house.

I was alerted to this particular book’s existence by my friend, Sarah McConnell, from ABC Broken Hill. You all know how much I love cooking, especially when the recipes are delicious and involve ‘everything is right there in the pantry’ fare. I have quite a collection of these station/homestead/farm cooking books, and swear by them all. You can’t go past old-fashioned, down-to-earth country cooking. But then, I guess, coming from a line of good, old-fashioned country cooks, I’m biased!

This particular cookbook is created by the Broken Hill School of the Air. It’s beautifully presented in hard cover, with some wonderful photo’s just to break up the prose. I so wish I had this book last year when I was cooking on the station in Western Australia’s Pilbara. The section on savoury smoko’s would’ve been particularly fabulous as I was running out of ideas by the end of mustering.

In it, I've also found THE most AWESOME banana cake recipe aptly called the 'Best Banana Cake' and shared in the book by Glendara Station. I thought I had a good Banana Cake happening, but I tell you, this one is so much better. The recipe makes a large cake, is moist, and postively scrumptious. Here is one of the two loaf pan cakes made using the recipe this morning.

I asked co-editors, Pixie Moses (Mt Westward Station) and Bree Wakefield (Banoon Station) what inspired the book and where they planned to invest the funds raised.

“We decided to create the updated version of the School of the Air cookbook to mark the 60th anniversary of the school. It has been a labour of love. A huge project with big results. Our first print sold out in 1 month! The recipes are tried and tested recipes submitted by our school families, teachers & governess'. Ranging from traditional homestyle meals to modern side dishes & desserts as well as a chapter featuring thermomix recipies. The gorgeous station photographs through out the book have been as well received as the recipes themselves. It really showcases our unique outback lives. Funds raised from the books will be used towards something major for the school that will benefit the students for years to come.”

I for one, can see this beautifully presented, hardcover cookbook becoming one of my everyday ‘go to’ references.

You can read more about the book and purchase your own copy here: http://www.bootsoffapronon.com

And finally (because I seem to have gabbled on forever), last weekend, I made a new dish, a winter warmer, Chicken and Potatoes with Garlic Parmesan Cream Sauce. (I want to lick the screen just saying it.) It was a hit at the homestead with even the kids digging in without any complaints. WINNER! So, I thought I'd share it as you might be looking for a winter warmer recipe this weekend for your family. I can highly recommend it. It's 'Damn Delicious'! You'll find the recipe at http://damndelicious.net/2016/05/08/chicken-potatoes-garlic-parmesan-cre...

Until next week, and amongst other things like editing LAKE HILL, I'm going to keep vacuuming with my Stihl (STIHL LOVE IT! :)) to stay warm!